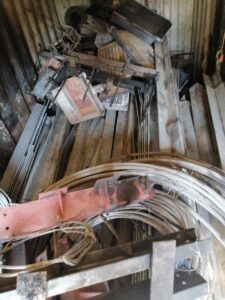 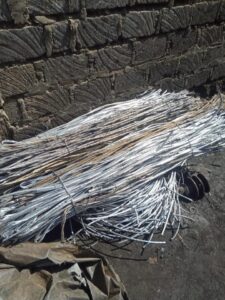 A further search in nearby homesteads led to the recovery of more vandalized apparatus, where a container full of steel bracings obtained from critical electricity transmission towers were recovered.

Following the raid, Johana Thuku and Stephen Githitu, were arrested and arraigned at a Thika court for the offence of vandalism. Additional counts of handling stolen energy equipment were also slapped on the suspects.

A third suspect, Patrick King’ori, was arrested later in the evening as he tried to escape the police dragnet.

The detectives have intensified the war against vandalism of critical national installations that has recently been on the increase.

The arrest of the three suspects comes barely a month after President Uhuru Kenyatta, announced a moratorium in scrap metal trade due to runaway vandalism, targeting critical national infrastructure.

The level of greed by unscrupulous traders out to make illegal profits by vandalizing critical installations has hit alarming rates, threatening the country’s economy.

On January 11, this year, Kenyan homes and businesses were plunged into darkness after a high voltage transmission line connecting the capital collapsed, in what was suspected to be high-level vandalism.

Last November, operations along the busy Mombasa-Nairobi Standard gauge railway (SGR) had to be stopped for two hours, after gauge blocks were vandalized from the line.

So far, five suspects have been arrested and presented before court, since the crackdown began.