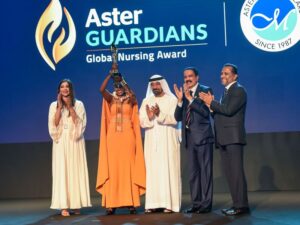 Anna Qabale Duba, a nurse at the Marsabit referral hospital is the first ever nurse to win the newly launched Aster Guardian Global Nursing Award.

Qabale emerged the best out of 24,000 nurses across the globe who submitted their entries to win the coveted Royal award from the Dubai royal Family.

Qabale was acknowledged for her tirelessly effort in Marsabit County to empower the community with education and her campaign against harmful cultural practices such as Female Genital Mutation. 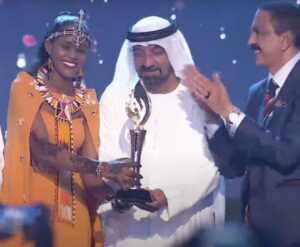 Speaking at the ceremony Qabale said: “I could not have imagined in my wildest dreams that I would be acknowledged and celebrated in such a way. This is a win for Kenya, for Africa and the girls in the villages,”.

Qabale, selected by an eminent grand jury from ten finalists, is the first woman graduate in her village. She has dedicated her life towards literacy and serving the masses through the Qabale Duba Foundation. She thanked her mother and husband for their unconditional support.

Coincidentally the day happened to be her wedding anniversary.

The award received nominations of 24,000 nurses from all over the world.

Other nine finalists also received monetary prizes at the event.