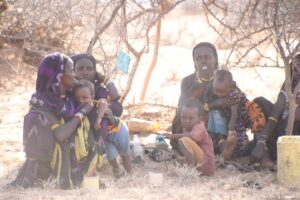 Pangs of Drought strike deeper among residents in Marsabit County.

The overall food situation in Marsabit continues to deteriorate due to failed rainfall in the entire Marsabit county Marsabit, Northwestern part of Kenya.

Pasture is depleted in many parts of the county and food security has worsened making the situation dire and wanting.

Most Households in El Beso village, which is 45km from North Horr Town are facing crisis.

For long they have been moving with their livestock in search of water and pasture but currently they are forced to stay at one point since their livestock has all died due to the pangs of drought. 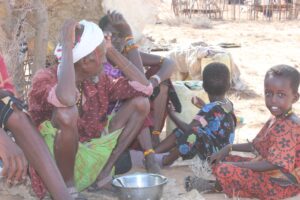 An elder at El Beso village sharing a plate of food with his family. Photo: Silvio Nagori

Towards there, the road looks agitated, boisterous and choppy. As you travel there, the carcasses of animals are scattered all over; on the roads side lies dead goats, sheep and camels depicting sad picture of how bad the situation is.

Moving deeper off road temporary and unfinished few Manyattas are seen with women and children under the shade. 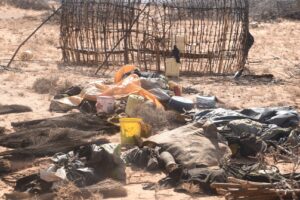 Roja Doko 65, a mother of 6 children. Looking at Her face she looks hopeless and pessimistic.  She Holds a one-year baby who her mother died after she was delivered.

Around her homestead, trees that were used to be green have turned yellow, vegetation around the area looks wilted and deprived of water for a long period, and grass which normally bends to a degree when stepped on due to its fleshy stems now makes a cracking sound like what you would expect when breaking a stick.

This is her new home. She found herself there after her and her friends were moved to a new place for them to seek refuge and help after their livestock we swept away by extreme drought.

“So many people have lost their animals. Thousands of animals have died. There is no water for my family and me. Out of almost 300 goats, I have none, all died” She said.

The main climate change perceived by pastoralists in the area include more erratic and reduced amounts of rainfall, rise in temperature and prolonged and frequent periods of drought.

After three years of lack of rainfall most of the boreholes and wells in the region have run dry the situation which forces them to walk several kilometers to seek water and sometimes depends on the water delivered by NGOs. 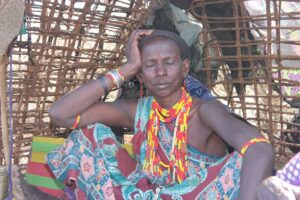 Doko says that since she lost her livestock and her husband has been busy going to nearby centers where he waits for government help or Non-governmental organizations to chip in and distribute them with foodstuffs to feed his family.

“We came here in the hope that we will survive by getting support. After our livestock died Life became so hard to an extend that we do not have food or milk for the children”.

She says as she stares sadly at the decomposing carcasses of her livestock, lying just a few metres from her newly built manyatta. 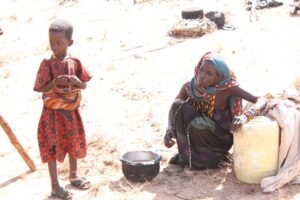 Bone Dokho, 47, a mother of seven, she is preparing powdered milk tea for her 2 children.

Few meters from Doko’s Manyatta is Bone Dokho, 47, a mother of seven, she is preparing powdered milk tea for her 2 children who are all waiting to have a sip of it to at least Sate their hunger.

In the evening. The sun is scorching hard. She said that tea is the only thing she can afford to give her children. Her and her children have not eaten anything since morning.

“This is the only meal I can offer my kids at these hard times. I am not sure if we can get any food before tonight. My husband is yet to come back after three days of moving far end to look for our food. We are just alive by the grace of God”. She said. 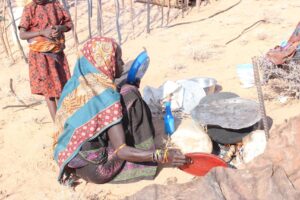 Mrs. Bone Dokho, preparing powdered milk tea for her children. She says tea is the only thing she can afford by that time to give her kids as she waits for aid.

It is evident that water is another scarce commodity in El Besso. Mrs. Bone is preparing her tea using brown water she fetched from an almost drying borehole.

She said that they were given powder milk when their livestock was swept by ravaging famine, which has colonized the area for three years now. 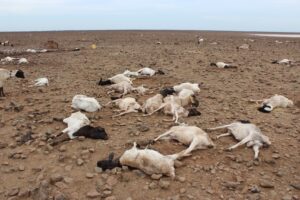 Carcass of sheep and goats, which died due to effects of drought.

North Horr Ward Member of County Assembly (MCA) Tura Ruru Elama showed his displeasure on the pace in which the government agencies are taking to act on the effects of drought.

“If the government of Kenya doesn’t take quicker action within one or two weeks then we will be in for rude shock. Right now, one person has died due effects to hunger. Many households are going without food”. He alleged.

It is Estimated that around 70,000 people in North Horr constituency of Marsabit county needs humanitarian aid. Most of residence here that is 95% of them are in such situation due to over dependence in one source of livelihood; pastoralism. 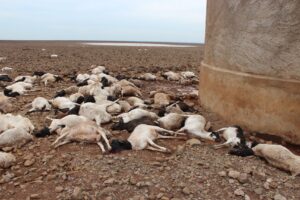 Several people lost more than 100, 000 their goats and sheep during Monday 17th Jan 2022 evening rains which is said to be the cause of the death of their Livestock.

According to Mr. Mustafa Parkolwa who is National Disaster Managent Authority Director Marsabit County is that the figures could even go beyond that after several of people lost more than 100, 000 their goats and sheep during Monday 17th Jan 2022 evening rains which is said to be the cause of the death of their Livestock.

“The number of people who needs humanitarian assistance and government interventions in the whole county is currently about 200, 000.  The government has done a lot but still not enough to salvage our people who has been affected by drought due to failed rainfall thrice”. Parkolwa paused.

Nura Duba, the Agricultural officer in Marsabit said that it is normal for emaciated animals to die during rainfalls due to Pneumonia.