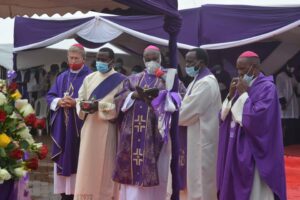 After 64 years of religious life, the bishop Emeritus Ambrose Ravasi IMC. was laid to rest on Friday the 6th November 2020 at the Maria Mfariji Shrine in Marsabit where he had chosen while still alive.

The Italian born bishop was called to glory on 30th of November while undergoing a dialysis at the Mp Shah hospital in Nairobi. He had fallen while at the shrine in Marsabit. According to doctors at Mp Shah in Nairobi, an x-ray showed a born in his knee had fractured and a piece of the born hang in his flesh.

Being a man of advanced age, the doctors advised that before any surgery would be done to him, they had to ascertain all other health factors including the state of his kidneys.

According to his successor bishop Peter Kihara, the late bishop chose to stay in Kenya and particularly at the Maria Mfariji Shrine in Marsabit during his retirement. He had set up the shrine himself and chose to stay and pray there waiting for his day which he was prepared for.

Bishop Kihara eulogised the former chaplain of Igoji teachers training college as a very obedient and selfless servant who first came to Kenya in 1971. He was the first rector of the Consolata missionaries’ seminary in Kenya after serving as vice regional superior.

Bishop Kihara praised him for consoling the hearts of people of Marsabit for 39 years where he went ahead to open schools and health centers before retiring 14 years ago.

During the requiem mass on Thursday after the arrival of his body in Marsabit, bishop Kihara said it is time for the bishop emeritus to be crowned for he has faithfully served without wavering.

Bishop Ravasi who traversed both Marsabit and Maralal dioceses in his land rover commonly referred to as ngamia was a darling to both Christians and non-Christians. They all braved the cold and rainy weather on Friday at least to show their last respect the fallen icon.

Most of them remember him as a charismatic, genuine, kind hearted and trustworthy man who showed love and care to everyone no matter the religion, colour or even tribe. 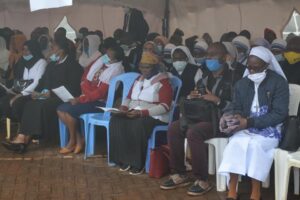 His common words were sung during the burial ceremony. He is remembered to console locals by saying “maisha ni magumu lakini mara ingine  ni matamu, ni lazima tuyavumilie mpaka mwisho” loosely translated as “life is both hard but can be sweet again and we must tolerate to the end.”

He always said this while he traversed the dilapidated roads of Marsabit and Samburu counties. He would meet the less fortunate, the hungry and neglected in the society while encouraging and committing himself to praying for them.

He valued the local people and above all put more significance in collaborative ministry as envisioned by a profession of faith and a program for action by the Catholic communities of Marsabit and Samburu districts in 1987 in the document “The Church We Want to Be.”

The main celebrant was Right reverend James Maria Wainaina while the sermon was given by Bishop Ravasi’s student and bishop of Maralal Virgilio Pante.

Bishop Pante described him in his sermon as the man who had been blessed with a big voice to go out and preach the gospel. 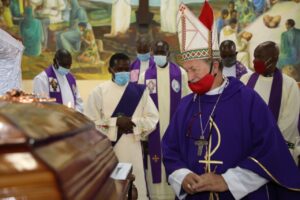 Bishop Ravasi, an Italian born Kenyan Bishop, was born on 7th February 1929, ordained as a priest on February 9th 1957 and at the age of 52 he was ordained as the bishop of Marsabit diocese on June 19th 1981 where he served until 2006 when he retired.

The leaders acknowledged that the Catholic Church helped them get education in the 70s and even confessed that they would not be where they are today were it not for the efforts of the Catholic missionaries.

The cabinet secretary for Treasury suggested a memorial hall for all the fallen missionaries to be set up in Marsabit.

Other priests, sisters, brothers and lay Christians showed their gratitude towards working with him, all in one accord saying he has added so much knowledge and love to their lives.

Most of them also said that he has left a legacy of love and selflessness to the people of this county.

The late bishop Ambrose Ravasi wished to be buried at the Maria Mfariji shrine grounds next to the late father PaoloTablino. 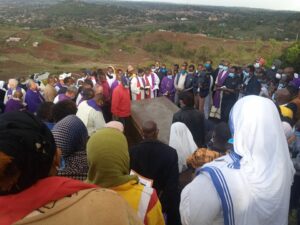